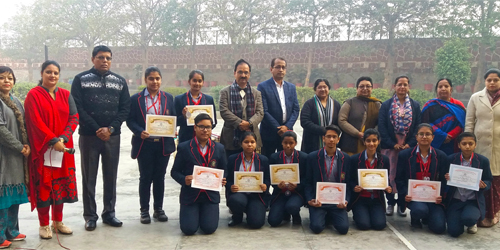 What may seem as bitter trials for some are actually challenges to be tackled head on for those who are determined achievers.

This was proved yet again at Sant Nirankari Public School, Nirankari Colony, Delhi in the Felicitation Ceremony by Anuvrat Nyas Institute on Jan., 18, 2018 wherein the efforts of those who went the extra mile was recognized and appreciated. While the event was an occasion for felicitating the proud prize winners in various categories, it also served to spur on the rest to make greater efforts to figure among the proud awardees the next time round.

Mr. Ramesh Kandpal, National President and Secretary, Anuvrat Nyas and  Mr. Vijay Raizada, Coordinator, Anuvrat Nyas were  the special guests on this momentous occasion . They not only felicitated the students but also apprised them about character building. Mr. Ramesh Kandpal addressed the students and faculty and propagated the fact that the function of education is to teach one to think intensively and to think critically. Intelligence plus character; is the goal of true education. An anecdote by him, on moral values, too was very enlightening and left everyone spellbound.

Then was the Prize Distribution Observance. As for the achievers themselves, it was an honor to be acknowledged in front of the audience comprising their peers and teachers.  The Essay Writing Competition (English and Hindi) and Drawing Competition winners were judged on the basis of First, Second and Third winner along with two Consolation Prizes. The winners were given a certificate along with a medal by Mr. Vijay Raizada, Coordinator, Anuvrat Nyas.

The winners were as follows:

The English faculty – Ms. Himangini Kumar and Ms. Rekha Rani and the Hindi Faculty – Ms.Megha Malhotra and Ms. Rachna Bhogra were also felicitated with a participation certificate and a pair of books for their poetry. In addition to this, Mr. Pankaj , the Hindi faculty was felicitated with a certificate, a pair of books along with a cheque of Rs. 1100 for his stupendous poetry that was ranked the third nationwide.  Ms. Ranjana Grover, the senior Coordinator was also felicitated on behalf of the Principal, Ms. Poonam Syal.

Thus, it was indeed a joyous and memorable day. Hoping for more such enlightening and captivating programmes.

A TRIP TO CHOKHI DHANI AND ADVENTURE ISLAND – METRO WALK