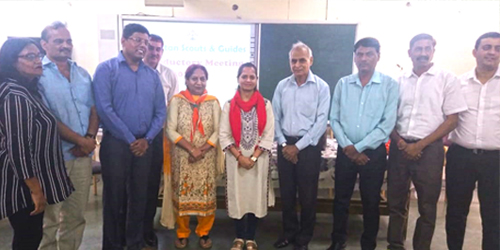 An Introductory Meeting of Hindustan Scouts & Guides (2018-19) of Delhi  state was held at AG D.A.V Centenary School, Northex ,Model Town on 3rd May, 2018 to select and introduce dignitaries of Hindustan Scouts and Guides of zone North West(A).The Scouts & Guides heads of 20 government schools and 9 Public schools of zone IX & X attended the meeting. Ms. Rekha Rani (Heads-Guides) and Mr. Pankaj (Heads –Scouts) represented the school in the meeting. It was a matter of great pride and honour that Ms. Rekha Rani, out of 29 school’s head’s was selected as one of the dignitaries and appointed as State Council Member and Mr. Pankaj was appointed as Distt. Quarter Scouts Master by the senior dignitaries of the department in the presence of Mrs. Usha (Head of Hindustan Scouts & Guides, India). Ms. Rekha Rani and Mr Pankaj were felicitated by the authorities with a Scouts & Guides scarf and special clap .The program ended with the vote of thanks given by Mrs. Mala, the Principal AGDAV School.